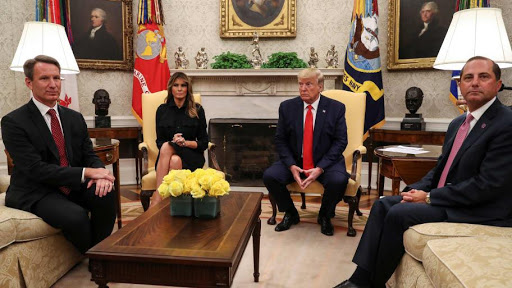 President Trump met with Health and Human Services Secretary Alex Azar and other health officials at the White House to discuss the measures to be taken. Azar said that the banning process could take months, but the Food and Drug Administration (FDA) will create strict guidelines to implement the ban on vaping devices.

In recent weeks, health officials became very concerned as hundreds of breathing illnesses were reported in people who have used e-cigarettes and other vaping devices. They are also alarmed by the large number of high school students and young adults that become involved with vaping over the years, and that number keeps on increasing.

At least 450 cases of a mysterious respiratory condition have been reported across 33 states. Six people have died. The most recent death was reported in Kansas.

“The Trump administration is making it clear that we intend to clear the market of flavored e-cigarettes to reverse the deeply concerning epidemic of youth e-cigarette use that is impacting children, families, schools, and communities,” said Azar. “We will not stand idly by as these products become an on-ramp to combustible cigarettes or nicotine addiction for a generation of youth.”

E-cigarettes do have the potential to help adult and non-pregnant women quit smoking, but they are not safe for youth, young adults, pregnant women or adults who do not currently use tobacco products, according to the Centers for Disease Control and Prevention (CDC).

Anyone who uses a vaping device should consider stopping while public health officials investigate, according to The Centers for Disease Control and Prevention.

CDC Director Robert Redfield has been invited to testify before a House panel at a hearing on the vaping issue on Sept. 24.