headline
The Reselling Era
I’m a Sports Girl & OK With It
Miss Americana: A Netflix Must See
Donald Trump, Third Impeached President, His Trial in Senate to Start Soon
The Duke and Duchess of Sussex plan to “step back” from their royal duties
Non-renewal letters have UWG students speaking up to defend their Faculty.

McKenzie Benefield’s accomplishments at the BEA Festival Reviewed by Webmaster on April 24, 2018 .

By Gabrielle Thomas, The WOLF Music Director McKenzie Benefield- Starting college can be a challenge for many students.…

By Gabrielle Thomas, The WOLF Music Director McKenzie Benefield- Starting college can be a challenge for many students.… 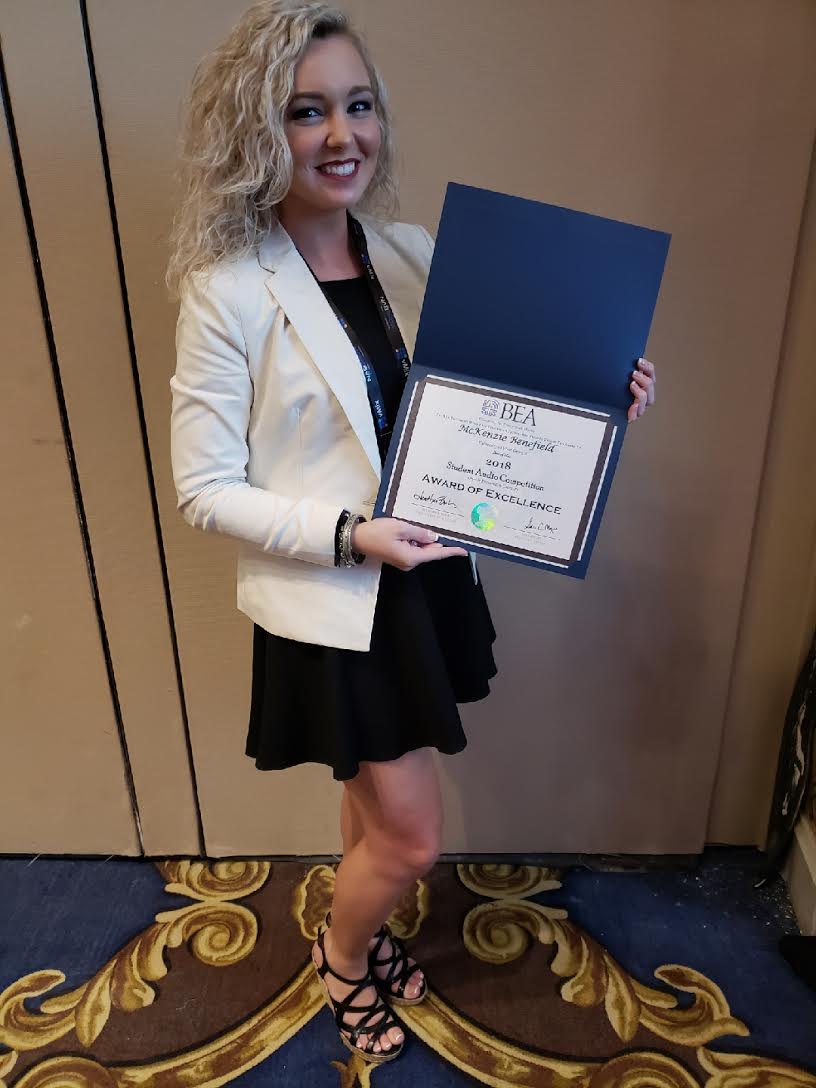 Starting college can be a challenge for many students. Some students begin not knowing what to do at all. College is a place to discover not only who you are as a person, but to also figure out your next steps for after graduation. In order to figure this out, many students turn to resources that are provided on campus to help students gain experience.
One key resource is student organizations. Many of these organizations can help prepare students for a successful future, but can also serve as additional families for college students who are away from home. These families nurture and support one another and are excited to see each other succeed.
McKenzie Benefield has found her family at The WOLF Internet Radio. Benefield began her journey at The WOLF by becoming a WOLF in Training (WIT) in the spring of 2016. This extensive, hands on, training program well prepared her for the next steps in her journey.
“The most rewarding part of being at The WOLF is the people I have met,” said Benefield. “By being at The WOLF, I have a group of people that I consider family and we have each other’s back.”
After completion of the WIT program, Benefield went on to hold positions as Assistant Production Manager and Assistant Program Director at The WOLF, all while establishing herself as a cofounder and host for the radio show, College Circuit.
Benefield has enjoyed her time at The WOLF and has discovered what she likes most about the radio station.
“What I admire most about The WOLF is that it’s totally different people, different races, genders, personalities, and interests that all come together to make one thing work,” said Benefield. “I have a lot of friendships within the station. People that I can go to talk about college or work or life in general or to just pull me out of the dumps when I’m feeling my lowest. I’ve met those people here.”
Last fall, The WOLF received its first recognition in the Student Audio Competition of The Broadcast Education Association (BEA) Festival of Media Arts, for Benefield’s award of Excellence in the On-Air Personality category.
Benefield’s award for On-Air Personality is the first time a single student at The WOLF has been acknowledged during on-air shifts and shows.
“It’s surprising,” said Benefield. “It’s humbling. I’m honored and excited, just to have internationally been recognized as an on-air personality. That was really cool.”
Benefield received her award during the BEA’s annual convention and Festival of Media Arts, which was held from April 7th through 10th of this year, in Las Vegas, Nevada.
When Benefield first came to UWG in the spring of 2015, she wasn’t quite sure what she wanted to do, as far as a major.
“I was coming out of a really deep, dark place in my life and I started listening to radio,” said Benefield. “Specifically I started listening to the Bobby Bones Show, which is a nationally syndicated country music radio show, coming out of Nashville. It was a time when I needed a voice from somebody that was bigger than me and then it just kind of clicked. Something was telling me you need to become a voice for those that are looking for a voice.”
Benefield considers her family as her strongest support system.
“My mom has been my A-1 since day one,” said Benefield. “She’s always pushing me to go forward, no matter how trying it may be.”
Along with the support of her family, Benefield gains inspiration from listening to the host of The Bobby Bones Show. Benefield listens to the show every chance she can, even though the show airs at 6:00 in the morning.
“Bobby Bones is such an inspiration,” said Benefield. “I’ve listened to him for about 4 years now, and he’s just one of the few people in the industry that keeps it real. I’ve followed his story and he literally built his legacy on his own. He went from nothing to the biggest man in country music.
“I’ve also been blessed to meet and speak with him at least five times,” continued Benefield.
Upon graduating in May of this year, Benefield plans to remain in the radio industry.
“The dream job is Nashville,” said Benefield. “Anything in Nashville because it’s my home away from home.”
Benefield took a chance on herself and discovered that she can succeed in the radio industry, all with the help of the family she has at The WOLF.
“Not only has The WOLF been an asset as far as what I want to do in the future, but it is literally like a family,” said Benefield.